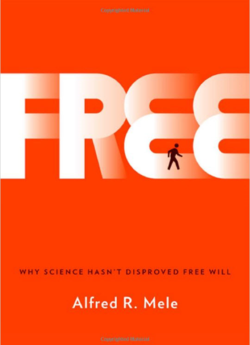 In the book Mele sets himself the task of explaining in terms accessible to everyone why recent highly publicized discoveries in neuroscience and psychology do not show, as some have claimed that “free will is an illusion”.

Dennett thinks Mele accomplishes his goal.  As Dennett notes, it is an important part of Mele’s strategy to demonstrate that one need not take sides on the grand philosophical debate about free will to understand why the scientific “dis-proofs” are bunk. The grand philosophical debate is about whether free will is compatible with determinism, but Mele shows we can remain neutral about all that and still explain why nothing recently discovered in the lab should undermine the plain man’s confidence that some of his choices are free.

“…it may well be that his tactical neutrality on the issue of compatibilism will win him the support of the vast majority of philosophers who have thought hard about free will: we philosophers disagree vehemently about whether compatibilist free will is the only kind of free will worth wanting (as I, for one, have argued for many years), but we agree with Mele that the scientists have jumped to unwarranted conclusions, for the reasons he presents so calmly and clearly in this little book.”

We agree.  It’s a good book.  Indeed, it’s a model for the kind of writing philosophers should do more of if they hope to gain an audience outside of their cloistered specialties.

But then Dennett says this:

“This review could similarly end on the mild, modest verdict that Mele has done his job and done it well. But there is a larger context worth considering. Suppose you were reviewing a scientific report that drew the conclusion that a diet without fat was in fact unhealthy, and that butter and cream and even bacon in moderation were good for you, and suppose further that the science was impeccable, carefully conducted and rigorously argued. Good news! Yes, but the author acknowledges in fine print that the research was financed by a million dollar grant from the Foundation for the Advancement of Bacon. We would be entitled—obliged—to keep that fact in the limelight. The science may be of the highest quality, honestly and sincerely reported, but do remember that the message delivered was the message hoped for by the funder. This is not reporting a finding contrary to the goals of the fact-seekers.

So it is important to note that Mele’s research, as he scrupulously announces, and not in fine print, is supported by the Templeton Foundation.”

This is, we think, is disgraceful.

It is disgraceful because Dennett is coyly, with nodding winks and cunning smiles, inviting the reader to commit the ad hominem fallacy.

As first year critical reasoning students learn: you commit ad hominem when you criticize the arguer, not the argument.  It is a fallacious move because a logically valid argument is valid however evil or interested the arguer might be or who is paying him to make the argument.

So take Dennett’s fantasy story seriously.  What difference should it make that the nutrition study was funded by Big Bacon?  The right answer is none whatsoever.  What matters is the science that backs the study, not who backs the research. If indeed the science is “impeccable, carefully conducted and rigorously argued” then you are not “entitled”, let alone “obliged” to keep its sponsorship “in the limelight“.  You are in fact intellectually obliged to ignore that fact if you want to criticize the study (or review it for Prospect magazine) because the motives of the researcher or his employers are always beside the scientific point.

“Might not the evil Bacon People have encouraged the researcher to lie about his results?”  Maybe. But unless you have evidence that this has actually happened (so that the research is not impeccable) talking about the “goals of the fact-seekers” is slander, not science.

The Templeton folks are interested in advancing free markets and religion, not bacon and butter.  That makes them suspect in Dennett’s eyes.  Fair enough, but how does this suspicion transfer to  Mele’s philosophy? Is Dennett really accusing Mele of tailoring his philosophy to Templeton’s ideology?

“Alfred Mele is in an unenviable position, and there is really nothing he can do about it. Was his decision to stay strictly neutral on the compatibilism issue a wise philosophical tactic, permitting him to tackle a more modest project, demonstrating the weakness of the scientific argument to date, or was it a case of simply postponing the more difficult issue…”

The suggestion here is clearly that Mele might really have refrained from discussing this issue, not because he thought it irrelevant to his project, but out of fear of offending his Templeton paymasters.

Framing it as a rhetorical question doesn’t make this accusation any less slanderous.

Dennett closes his review with an extended sneer:

“The Templeton Foundation insists that it is not anti-science, and demonstrates this with the bulk of its largesse, but it also has an invested interest in keeping science from subverting some of its ideological aspirations, and it just happens that Mele’s work fits handsomely with that goal. And that, as I persist in telling my friends in science whenever they raise the issue, is why I advise them not to get too close to Templeton.”

He owes his readers something else.  Ad hominem slurs are everywhere and they are everywhere poisonous to public discourse.  They are the weapon of choice in the culture wars that now seem to engulf every aspect of intellectual life.  This is something philosophers should deplore, not indulge.

As a public intellectual who is also a philosopher, Dennett owes it to us to set a better example.

UPDATED:  Dennett has replied and the debate continues  at Daily Nous.