Despite its central role in so many philosophy disputes– or perhaps because of it– there is widespread confusion about what ‘determinism’ means.

“…determinism says that, given the state of the world at any particular time, the laws of nature determine all future developments, down to the last detail. Another convenient way of putting the thesis is this: a complete description of the state of the world at any given time and a complete specification of the laws of the nature together entail every truth as to what events happen after that time.”  Ginet

Determinism requires a world that (a) has a well-defined state or description, at any given time, and (b) laws of nature that are true at all places and times. If we have all these, then if (a) and (b) together logically entail the state of the world at all other times (or, at least, all times later than that given in (a), the world is deterministic. Logical entailment, in a sense broad enough to encompass mathematical consequence, is the modality behind the determination in ‘determinism’.  Hoefer

To see what’s wrong with this, consider this simple, logic circuit world

Possible world W1 is governed by the simple law:

L1  It is nomologically necessary that: A iff (B v C)

But W1 isn’t really deterministic in the sense that anyone intends.

Of course, given that A is false at W1 we know given L1 that both B and C must be false. But L1 does not require that A is false. So what would happen if A were true at W1? Would B be true, or C or both? 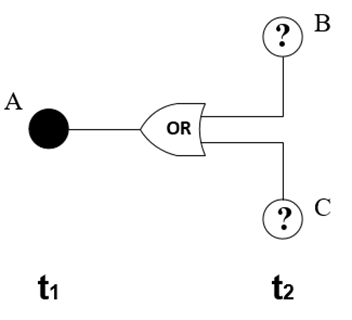 Notwithstanding W1’s simplicity and the clarity of its laws, there is obviously no determinate answer to these questions.

We can infer the actual future of W1 from its actual past but that we can do so is an accident of what is actually true in it. We could not predict its future if it’s past were different; different in ways its laws permit. Which is why no one would call W1 “deterministic”. Indeed W1 could serve as a poster child for what everyone means by ‘indeterminism’.

John Earman gets it right,

Why do so many get it wrong? We think it not so much a matter of carelessness but as the upshot of a kind of philosophical wishful thinking. The wish is that the “nomological” in nomological determinism would go away. Recall Hoefer’s claim that:

“Logical entailment, in a sense broad enough to encompass mathematical consequence, is the modality behind the determination in ‘determinism.'”

Hoefer wants the only kind of necessity involved in determination to be logical. He wants to see the determination of facts as simply a matter of their entailment by the more general truths we call “laws”. But determination means more than that. When we speak about determinism we suppose not just that there are laws of nature that describe general truths about the way world is but that they also, somehow, circumscribe the ways the world can be.

A deterministic system of laws is one such that, whenever two possible worlds obey the laws perfectly, then either they are exactly alike throughout all of time, or else they are not exactly alike through any stretch of time. They are alike always or never. They do not diverge, matching perfectly in their initial segments but not thereafter; neither do they converge. Let us assume, for the sake of the argument that the laws of nature of our actual world are in this sense deterministic.  Lewis

By explicitly quantifying over nomologically possible worlds, Lewis captures the modal commitments the standard definitions overlook. His definition makes clear how much we are assuming when we assume for the sake of any philosophical argument that determinism is true.

And yet we contend that even Lewis does not get determinism right. Lewis gets it wrong because he has other metaphysical doctrines that prevent him from properly understanding the implications of determinism.

Here, across the centuries, two great systematic metaphysicians directly contradict each other.

When we evaluate a counterfactual of the form:

We consider whether C is true at worlds like ours at which A is true. But because Lewis does not “hold the laws sacred”, he doesn’t think that we are constrained to consider worlds that obey the laws of the actual world. Indeed, Lewis supposes that, if the actual non-A world is deterministic, then the closest worlds where A happens will always be ones in which A is the upshot of “miracle” — an event contrary to the laws of the actual world– which occurs at or shortly before t1. The histories of such worlds—the way things would be if A– are exactly like ours right up until the moment of the miracle.

For Lewis, “Backtrackers”– counterfactuals which assert that the remote past would have been different in some non-miraculous respect if the present were otherwise– are always false.

But Lewis’ theory is not the only one on offer. In past posts we have argued for a different theory: Jonathan Bennett’s Simple Theory of Counterfactuals.

Bennett’s theory does “hold the laws sacred”. It holds that when we evaluate

Thus Bennett’s theory vindicates Leibniz: Nomological Determinism entails Counterfactual Determinism. And that, we submit, is yet another argument in favor of Bennett’s Simple Theory.

The Origins of Property: A Parable with Morals